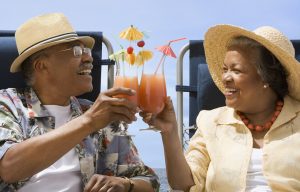 So what do I mean by the 30 Bonus Years™?  My focus is on longevity and the fact that we now have this whole new “segment” of our lives that we have to figure out what to do with and how to plan for…..Most of us will be experiencing many different transitions during this time period (good and bad) – widowhood, second careers, going back to school, new relationships, following our passions, reinventing ourselves, grandparenting, divorce, new hobbies, spirituality, chronic conditions, recovery, second families, etc.  Basically we will be recognizing a whole “new life stage”….instead of the traditional bell curve (young, middle age, old age) – we will have childhood, adulthood, new life stage (aka “30 Bonus Years”), retirement, old age…..

When the modern idea of the “golden years” of retirement was created in the mid-20th century, average life expectancy was barely over 65, and those who lived beyond it were often not fit enough to keep working or live independently.  But now that the average life expectancy is nearing 80 (plus) – many people approaching retirement age find they are definitely not ready to just step aside from life and be forgotten.  Until recently, living to 100 was considered a rare phenomenon.  Within the past few years (perhaps even within the past decade), however, with so many people reaching the century mark each month, scientists and lay people alike are beginning to look upon the oldest of the old as “beacons guiding us to a new, longer lived age”……Now in the 21st century, the philosophy of “30 Bonus Years” is within our grasp.  As people live longer, our concept of what it means to be old (and the age at which one becomes old) are rapidly changing.

Members of the youth culture, which dominated our society during the 1960s and 1970s, saw age thirty as the beginning of the end of life and enjoyment.  During the 1980’s, 40 was considered “over the hill.”  For the 1990s, there were sure signs that the “hill” was pushed to age 50 and beyond, and with it the idea of middle age.  Today, advertisements are portraying people at or near sixty/seventy plus as approaching the prime time of life.  This is welcomed news for baby boomers who are turning sixty at the rate of 8,000 a day!  So for those of us who once dreaded turning fifty, it’s a whole new world to explore and enjoy from 60 to 100 (and perhaps beyond!).  In essence, 60 is not the new 40 any more than it’s the old 70 or 80.  It’s the new 60.  Indeed, the whole post-midlife period is simply new territory, and those folks who are flooding into this phase constitute an entirely new phenomenon on the landscape.

So what are we to do?  How do we take advantage of these 30 Bonus Years?  What does research tell us will allow us to live as healthy, happy, wealthy and wise as possible during this new life stage we have been gifted?  What are the cutting edge trends?  I have been focusing on various categories that inform my audiences as to what we can expect to happen during those “30 Bonus Years”…..For example, what will happen in the below categories and beyond (influenced via research/trends/technology/media, etc.):

I’ve had a great deal of success (and extremely positive feedback!) as I’ve launched the 30 Bonus Years™ initiative and I’m very excited to create an innovative platform so that together we can begin to engage in intelligent  conversations around these issues.